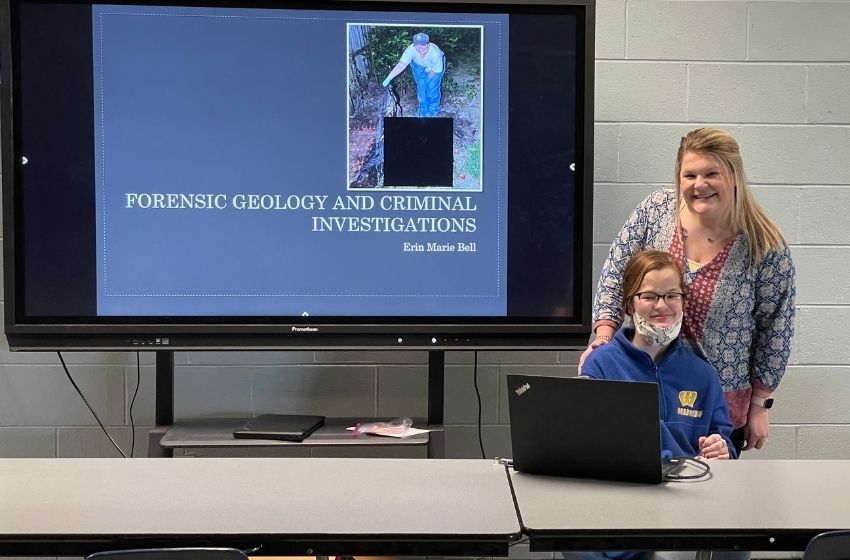 Forensic geologist Erin Bell offered to return to Martin Middle School and speak to the science club about her profession. She’s one of only four with her specific focus in the country. Assisted in her after school presentation to the group by her 8th grade sister Sadie, she touched on forensic photography, fingerprints, blood spatter (not “splatter” she noted) and more.

Almost every hand shot up when Erin Bell asked the Martin Middle School science club who liked crime TV shows such as CSI. At that moment, the former MMS student and now forensic geologist had to know she was about to wow her audience. Based on the questions asked and answered and the attentive quiet in the school’s cafeteria-turned-after-school-meeting room, nearly 40 science club members walked away with a broader knowledge of how photographs, fingerprints, and everyday items like silicone packets and hairspray help solve crimes.

Bell is a Westview and 2020 UT Martin graduate now working on a master’s degree at the University of Alabama in Huntsville. Employed by FSA Federal, a private contractor providing investigative support services to U.S. federal law enforcement and national security communities, she is one of only four forensic geologists in the country.

Her work relies on the “principle of the exchange,” she told the apt listeners. “Wherever you go, you leave something and you take something.” Using the example of an as-yet-unidentified bank robber who first walked through mud before committing the crime, she noted that much could be learned from a geological examination of the mud left behind.

To achieve the level of expertise requiring a knowledge of more than 4,000 types of minerals that make up rocks and apply that knowledge to criminal investigations, Bell followed a not quite paved path.

She isn’t a fan of math, she admits, and initially thought she wanted to be a doctor. But her interests led her to pursue a degree in criminal justice. A dual enrollment class in geology which had she and her classmates unearthing Civil War grave markers at a swimming pool dig site turned her attention to career options previously unconsidered.

During her presentation to the middle schoolers, a group that included her sister, 8th grader Sadie Bell, she shared photos from her training, including shots obtained from her time at the Body Farm in Knoxville. The University of Tennessee Anthropological Research Facility is the official name for the research and training center that utilizes donations to track information on a body’s decomposition in the various outdoor conditions.

Careful to block out elements of the photos that were intense and/or classified, Bell still provided a thorough overview of forensic photography noting that a “photo can make or break a case.” She had students identifying the best shots of tire tread reconstruction, guessing bullet entry and exit paths in a piece of sheet rock, and matching fingerprints.

Stories of evidence uncovered, obstacles overcome and cases solved served as encouragement for many of the students in the room to also consider their futures.

“Forensic work covers more than fingerprints and working with dead bodies,” Bell underscored. “We need people to pursue it as a career, to give justice to the families of the victims. It’s a rewarding career.”

According to Sheena Scott who serves as the science club sponsor along with Monica Collins and Becky Mullins and who, with Mullins, taught Bell during her time at MMS, several students got the message.

“She has inspired our students to think of career opportunities in the science field they may not have otherwise considered. After listening to Erin’s presentation, I had some students comment to me that they wanted to be forensic geologists and forensic photographers one day.  That is our goal, to inspire our students and create opportunities for success,” she said.

The MMS science club meets twice per month, completes various hands-on activities/labs/competitions, and discusses career opportunities in the science field. They plan on conducting some of the lab work – such as discovering prints using those silicon packets and hairspray – in upcoming labs.

“We were very impressed with Erin’s presentation! She explained to the students how she applies the science concepts we are teaching to her everyday work in a cool and interesting way.  We are very thankful Erin reached out and was willing to give back and inspire others,” Scott concluded.