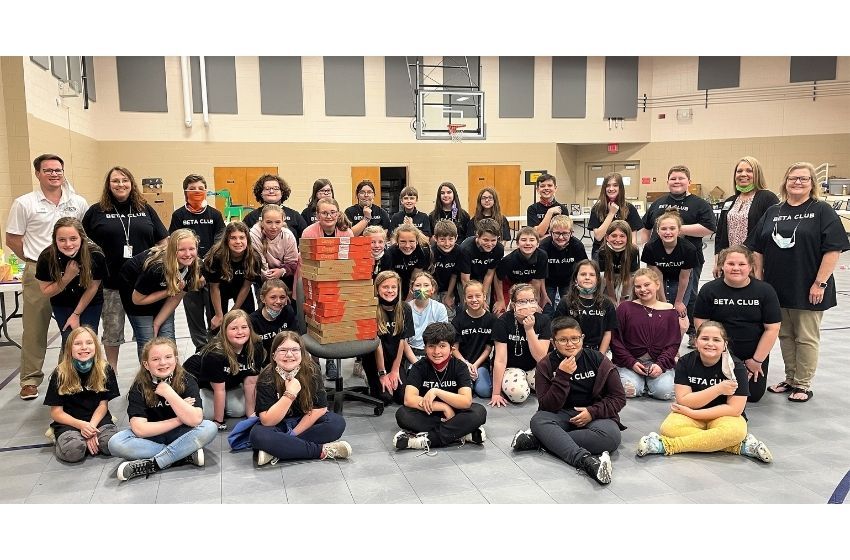 Beta Club promotes the four pillars of Service, Character, Leadership and Achievement. Thanks to the commitment of advisors Cindy Watkins and Tina Brown, Martin Elementary fifth graders experienced every aspect of the organization in a single day.

Since COVID-19 precautions meant field trips and excursions to the usual conventions were cancelled, teachers across the county have gotten creative with how to celebrate the work of their students.

Watkins, who helped found the MES chapter along with then counselor Megan Poore in 2012, and Brown transformed the school’s gym into an exhibit space, solicited community support for meals, and worked with fellow teachers and administrators to clear the day for recognitions, competition and service – a taste of what usually happens at the  statewide convention held in Nashville.

“The purpose of the day was to allow the kids the opportunity to compete even though we couldn’t go to the convention. I wanted them to still get a feel for it and get to compete and show off their artistic abilities,” said Watkins.

Students competed in the categories of visual arts, marketing and communications, and robotics. In previous years, the monthly meeting time was devoted to work on such projects. With COVID restrictions, members this year had to plan while socially distanced in the gym after school but do the hands-on work at home.

Recycled bottles, cardboard spools and plastic spoons became a dragon. Cardboard boxes were transformed into mailboxes and a “robot” fashioned after an ATM machine that serves as a receptacle for tips, thanks, and good ideas. Art in the form of paintings, photography, drawings, jewelry, and woodworking were all among the items created by the industrious 5th graders.

Some pieces of the art work will also be submitted into the Weakley County Schools Art Show, April 10, 11 a.m. to 2 p.m. at UTM’s Pacer Pond.

The day began with the 39 fifth graders being officially inducted into the organization. Then they made their way through individualized schedules that included time at service project stations, reading to other grades and offering tours of the exhibits to those classes, clearing trash, and a shared STEM project.

One of the benefits of offering a school wide Beta celebration, Watkins explained, is that the state competition only allows for one entry per school in the various competitions, so the MES version allowed for greater participation.

“They’ve had a good time and they worked really hard,” noted Watkins who serves as the school’s computer lab teacher when not working with Beta. She added, “Even if we do go to Nashville next year, it gave the 3rd and 4th graders particularly an opportunity to see what Beta Club does and hopefully motivate a few of them to be a part of it.”

“I think it was a fabulous idea,” she said. “The competitions and the service that Beta Club is based on is more than just going to convention. This has been a day of service — – picking up trash at the school, birthday boxes filled with cake mix, frosting, candles, and a special gift to be shared with children in need, handmade cards of thanks to the military and good cheer to those in nursing homes, reading to younger students. It’s all about service today.”

The emphasis on service did not escape fifth grader Lily Watson.

“Our principal didn’t want us just loosey goosey down here,” she explained of the day’s activities. “She wanted us doing something for our school. So we are going outside, picking up trash all around the school, making our school a better place, looking cleaner and nicer.”

Watson was also quick to praise advisors Watkins and Brown, who she said “worked very hard” to make the day happen including securing free breakfast and lunch. “We are very thankful for them. They have done a lot for us.”

The breakfast was provided by parent Beau Pemberton. Lunch came by way of First Community Bank, delivered by Kim Wheat and Grant Walton.

Brown, who is a 4th grade teacher along with her Beta advisor responsibilities, expressed both her and Watkins’ appreciation to Principal Rogers and all the teachers who were supportive of the day, allowing students to miss their usual class time and 3rd and 4th graders to participate in the book readings and tours.

“Students in Beta this year have been excellent,” she added. “They’ve overcome a lot of obstacles, went with the flow and been so appreciative.”