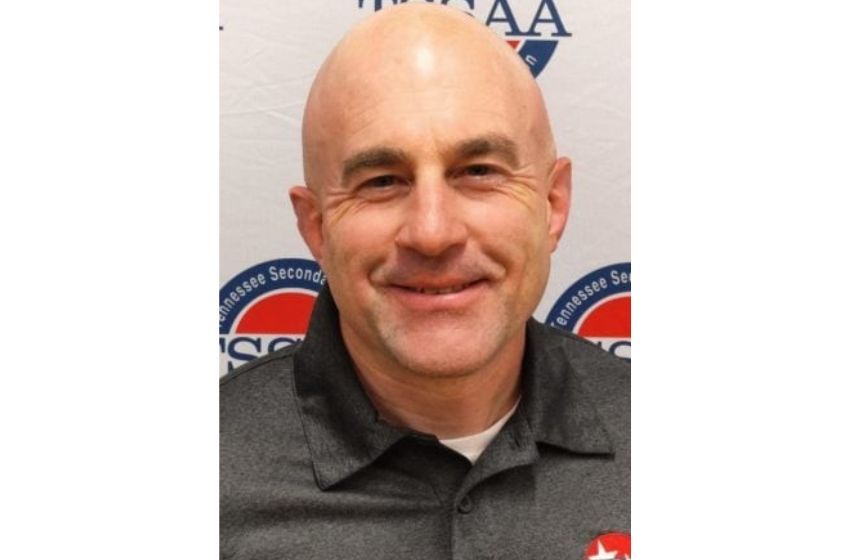 Not quite 15 years ago, shortly after completing his master’s degree in administration from Trevecca, Joe Blair first pondered a move away from coaching and the classroom.

This, mind you, was no small instance.

A Cleveland, Tenn., native who had made Brentwood his home immediately upon graduation from Tennessee Tech, Blair had flourished at Brentwood High School, first as an assistant wrestling coach and then as the storied program’s leader after veteran G. P. West’s retirement.

Yet the potential to join the Volunteer State’s governing body for prep athletics, the Tennessee Secondary School Athletics Association, first prompted Blair to consider something he otherwise had given no thought: possibly leaving Brentwood High School.

“A position had come open here 13 or 14 years ago, maybe when they hired Richard McWhirter (assistant executive director), and I had no experience whatsoever but as a shot in the dark I applied for it,” Blair, who wrestled in high school for the tradition-rich Cleveland Blue Raiders, said. “I’d just finished my masters in administration from Trevecca around that time.

“I’d been blessed to have a heck of a run out there my whole career. I had had some chances on the coaching side in the past to go to other places, but from knowing where I was academically and coaching-wise, Brentwood’s a special place, it really is. Principal Kevin Keidel is so good to work with, all the teachers and coaches are really good. I knew it would take something really unique and really interesting to kind of pull me away from that.”

That’s when fate and the TSSAA intervened once again. Having spent the past half-decade as the Bruins’ athletics director, Blair had honed his administrative chops.

Meanwhile, as heralded TSSAA Executive Director Bernard Childress readied for his retirement, a potential spot once again seemed in the offing at the state association.

When Mark Reeves ascended to the top spot as just the TSSAA’s third executive director since 1986 and just the fifth in the association’s 75-plus-year history, Blair once again considered the potential for a change in career path.

That the job could also foster Blair’s love for wrestling, tap into his burgeoning desire for personal development among coaches and open other opportunities made it an easy decision for Blair and his wife, Corrie, as well as their children, Macie, Hallie and Whitt.

“With this position overseeing wrestling, that’s kind of what my background is in,” Blair said, “plus sports medicine and coaches education and soccer and working in those areas, it really was something that was a good fit and I pursued to see how I could help out.”

A recent in-service at Ravenwood High School focused on general organizational issues and policies, but it also delved into the popular InsideOut Initiative done in concert with the Tennessee Titans, a program expanding in 2022-23 to even younger ranks.

“With the InsideOut Initiative, we’re getting ready to start the initial meetings with our middle school members,” Blair said. “I’m excited to see how that goes. And I’ve worked in the past with a group called A Better Way, that’s kind of similar to InsideOut, but helping coaches to communicate better with parents.

“Both are outstanding programs that I’ve had a chance to work with and see the implementation side of.”

Blair, whose family’s penchant for service through education includes the work of his mother, Mary Charles Blair, in the Cleveland system, as well as his wife’s previous work in Williamson County and current role as a pre-K teacher, is particularly passionate about growing the self-development and relational aspects of coaches and parents.

“I like the idea of helping to mentor coaches,” Blair said. “Not that I’m an expert, but when they grow in the profession to be the best they can be for their athletes, that’s what it’s all about.”