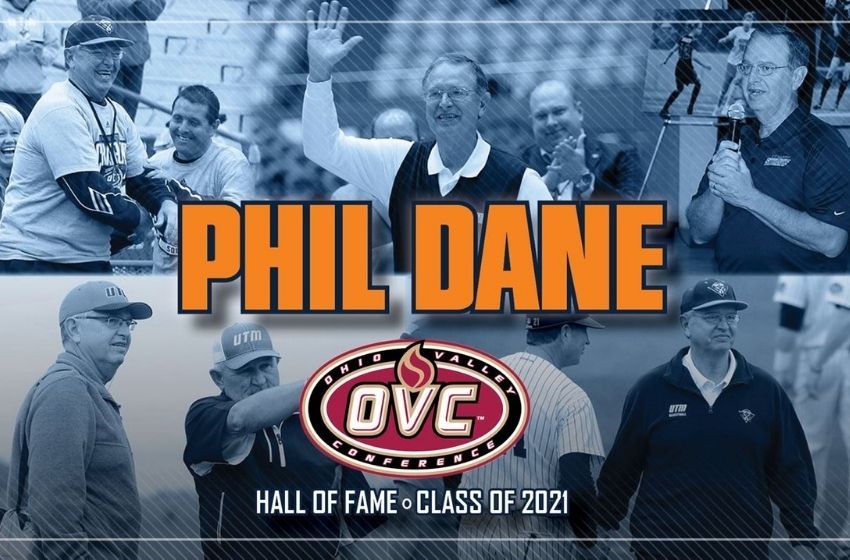 Former UT Martin director of athletics Phil Dane is one of the newest members of the OVC Hall of Fame.

For 13 years, Dane served as UT Martin’s Vice Chancellor for Business and Finance before moving into the role of athletic director, a position he filled from 2000 until his retirement in December 2013. His leadership and vision developed the Skyhawks from an OVC bottom feeder to a perennial league contender in mostly every sport. He oversaw 21 OVC championship teams – 15 of which came from 2009 through 2013.

Skyhawk Athletics set a program record for most OVC Medal of Honor (4.0 Grade Point Average) and OVC Commissioner’s Honor Roll (at least a 3.25 GPA) recipients in three straight years under Dane. That was capped off by 17 OVC Medal of Honor winners and 116 student-athletes earning OVC Commissioner’s Honor Roll status during the 2012-13 academic year. Overall, UT Martin Athletics achieved at least a 3.0 cumulative GPA for three consecutive semesters to round out Dane’s tenure.

A big part of Dane’s legacy was a $50 student fee increase in the fall of 2007. That generated roughly $600,000 annually and provided salaries for additional assistant coaches for volleyball, soccer, baseball and softball while creating a new full-time slot in the sports information department. While the additional funds also increased the operating and recruiting budgets, it also allowed Dane to make several facility upgrades to rank amongst the finest in the OVC. He administered facility upgrades for football, basketball, baseball, golf, soccer, softball and tennis facilities during his time as Skyhawk athletic director. Almost $2,000,000 in private funding was raised and aided a significant portion of the Bob Carroll Football Building and the state-of-the-art Rhodes Golf Center, amongst other amenities. UT Martin’s football pressbox, a facility that was spawned by Dane, officially opened in the fall of 2016 and adorns the ”Phil Dane Athletic Director Suite” on the third floor.

The OVC Hall of Fame was organized in 1977 with the intent of honoring the coaches, administrators, faculty and staff that have been associated with the league for at least five years and provided extensive and outstanding service to the conference. With the induction of this year’s class, the membership will reach 92.