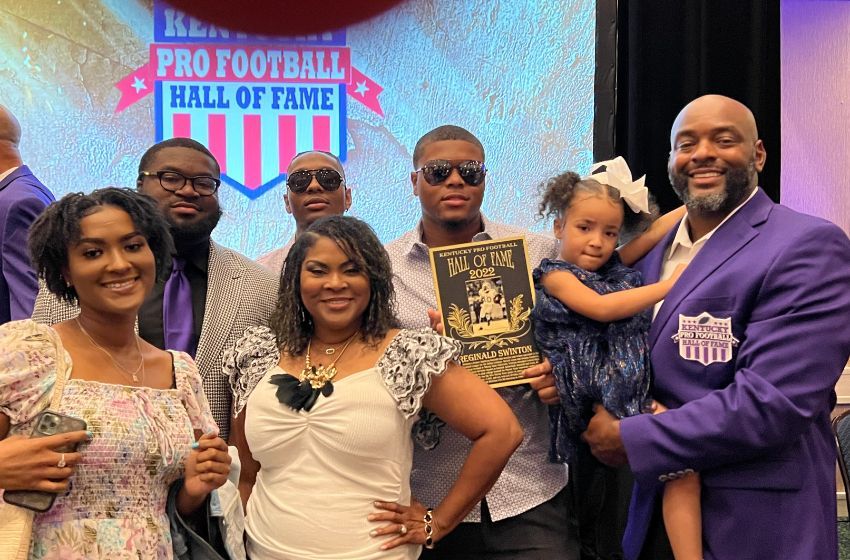 Former Murray State wide receiver Reggie Swinton was inducted Wednesday as part of the 2022 class of the Kentucky Pro Football Hall of Fame.

Swinton is the first Murray State player to be inducted into the organization in the 19 classes of the Kentucky Pro Football Hall of Fame.

Swinton competed for the Racers from 1994-97 for Coach Houston Nutt and Coach Denver Johnson where he was part of OVC championships in 1995 and 1996 and a big part of two of Murray State’s most successful seasons under Nutt with a 22-3 overall record and a 16-0 mark in OVC play. In 1996 Swinton was an All-America selection and was named All-OVC.

Signed as a free agent first by the NFL’s Dallas Cowboys, Swinton went on to a pro career that spanned five seasons from 2001-05 for a total of 69 games played. He also spent time on the rosters of the Detroit Lions and Arizona Cardinals.

In 69 games, Swinton was known as one of the top kick returners in the game. He fielded 132 career punt returns for a total of 1,311 yards and two touchdowns and in kick off returns, he had 208 returns for 4,919 yards and two touchdowns. In 2002 with the Cowboys, Swinton had the rare 100-yard kick-off return (Sept. 22, 2002) in front of more than 65,000 fans against the Philadelphia Eagles at Veterans Stadium in Philly. In 2003 at Soldier Field (Oct. 26, 2003) against the Chicago Bears, Swinton took a kick off for 96 yards and another TD. In 2001 with the Lions, he had a punt return of 65-yards for a touchdown at Texas Stadium against the Denver Broncos and had another punt return for a touchdown (Dec. 21, 2003) with Detroit against the Carolina Panthers of 89 yards at Ericsson Stadium.